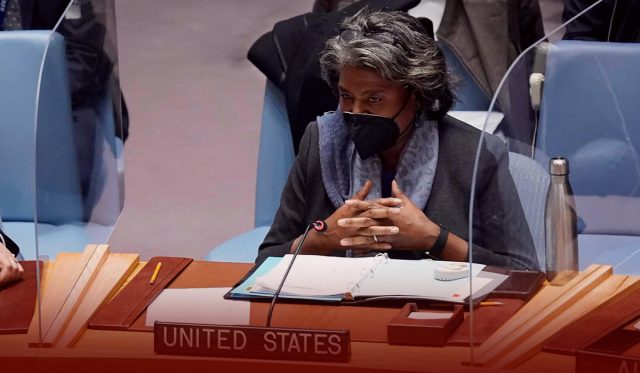 On Monday, Russia blamed the West for stirring up tensions over the Ukraine crisis and said that the United States backed pure Nazis to gain power in Kyiv, Ukraine, as the United Nations Security Council held a contentious and chaotic debate on the Russian troop buildup near its southern neighbor.

Linda Thomas-Greenfield, the United States Ambassador, retaliated to the Russian accusations and said that the increasing Russian troops’ deployment of over 100,000 along the Ukrainian border. Further, she adds that it was the largest mobilization in Europe in the last few decades, and she raised concerns that there has been an increase in Russian disinformation and cyberattacks.

Russian and the US officials accused each other of the Ukraine issue at the UN Security Council. Russia blamed that the US brought pure Nazis to power in Ukraine. Instead, the US retaliated that the Russian mounting troops along the Ukrainian border was planning of an invasion. pic.twitter.com/wrPJniGFDP

Linda said that Russians are trying to paint Western nations and Ukraine as the assailants to produce a pretext for attack without any factual basis. However, the harsh exchanges in the Security Council came as Russia lost an effort to prevent the conference and reflected the Gulf between the two nuclear countries. It was the initial open talks session where all protagonists in the Ukrainian issue spoke openly, although the most influential body of the United Nations took no action.

According to three Biden government officials, Moscow sent a written response to the United States in response to the American proposal to curb the ongoing crisis. Moreover, a State Department official denied offering details of the reaction, saying it would be useless to dialog in public and that they would leave it up to the Putin administration to talk about the counterproposal.

Officials from both sides are expecting more high-level diplomacy this week. So far, the dialogs between Russia and the United States have failed to reduce tensions in the crisis, with the West saying Russia is preparing for an attack. Russia rejects the claims that it is planning to invade Ukraine. Instead, Moscow demands vows that Ukraine will never join the NATO alliance, a ban to the deployment of NATO weapons in western countries near Russian borders, and a rollback of NATO forces from Eastern Europe. The U.S. and NATO call those nonstarters.

Vassily Nebenzia, the Russian Ambassador, accused America of interfering in the internal affairs of Russia and seeking a classic example of megaphone diplomacy. Linda countered that the United States held more than a hundred private meetings during the last some weeks with Russian officials and Ukrainian and European colleagues, and its now time for dialogue in public.