Home Updates Winter Storm Hits US with Threat of Tornadoes 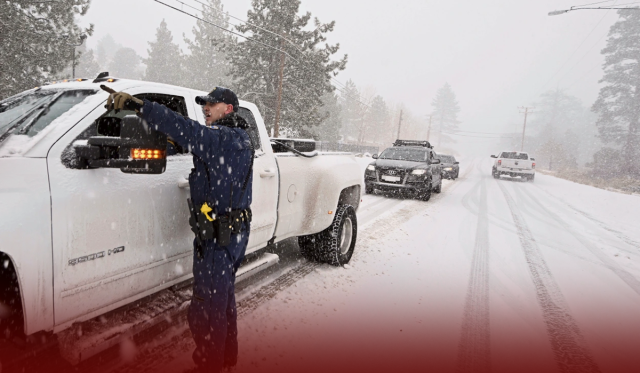 The first significant winter storm hit the U.S. on Tuesday, bringing snow, freezing rain, and sleet to the Northern Plains and Upper Great Lakes region. In addition to this frosty mix, the storm system posed a risk of tornadoes and floods for a large area in the South. The National Weather Service forecasted intense snowfall with rates of one-three inches per hour in certain parts of Nebraska, South Dakota, and Minnesota, along with thunder at times. Over a foot of snow was expected to accumulate in these regions.

The first significant winter storm of the year to affect the US brought snow, freezing rain, and sleet to the Northern Plains and Upper Great Lakes region on Tuesday. In addition, the storm system threatened tornadoes and flooding in many southern US.#winterstorm #USstorm #storm pic.twitter.com/EIrUmF3Eib

The National Weather Service predicted that solid and gusty winds would cause drifting and blowing snow, making road travel nearly impossible in some areas. In addition, snow, fog, mist, and freezing rain were expected to create dangerous driving conditions in other regions. The N.W.S. released ice storm warnings, winter storm warnings, & weather advisories for the St. Paul area in Minnesota and Minneapolis as freezing rain moved north through the region, followed by heavy snow bands.

The N.W.S. reported that around 6 inches of snow had fallen in the western suburbs of the Twin Cities and four inches at the Minneapolis-St. Paul International Airport by Tuesday evening, according to meteorologist Richard Bann from the Weather Prediction Center in Maryland. The storm front arose from a low-pressure system situated over Iowa. The wintry blast was anticipated to reach New England by Wednesday as part of a larger weather front bringing severe thunderstorms, hail, tornadoes, and heavy showers to the lower Mississippi Valley, Gulf Coast, Tennessee Valley, and southern Appalachians.

The N.W.S. issued severe thunderstorm warnings and tornado watches for a large area of Louisiana, Georgia, Mississippi, and Alabama and posted flood watches along the southern fringe of this zone. As of Tuesday night, the N.W.S. had recorded eight tornado reports and numerous instances of high winds pushing damage to power lines, homes, and trees. According to N.W.S. meteorologist Allison Santorelli, these events were all part of the same system: heavy snowfall on the west to northern side and rainfall and severe weather in the southern region.

FlightAware reported that over two hundred flights at the Minneapolis-St. Paul airport was cancelled on Tuesday. The West Coast also prepared for another “atmospheric river,” a dense moisture current at high altitude expected to bring drenching rains and possibly renewed flooding to central and northern California starting Wednesday. The Sierra Nevada mountains were forecast to receive heavy snow on Wednesday, with coastal rain and higher-elevation snow in the Pacific Northwest also expected.

Northern California was still dealing with the aftermath of a Pacific storm from the weekend that caused power outages, floods, road closures, and mudslides. N.W.S. meteorologist Allison Santorelli warned that the high winds accompanying the upcoming downpours could knock down tree limbs and uproot trees, leading to further blackouts. According to recent statistics from poweroutage.us, more than twenty-one thousand homes and businesses in northern California were without electricity as of early Tuesday.

Antonio Guterres, United Nations Secretary-General, announced on Monday that he would hold a “no-nonsense” climate ambition summit in September 2023, stating that there will be zero tolerance for greenwashers, blame-shifters, back-sliders, or those who try to repackage old pledges. During a press conference to conclude 2022, Guterres also declared that he “will not relent in the quest for stability and peace in Ukraine in line with the United Nations Charter and international law.” One of the U.N. Charter’s founding principles is respect for sovereignty and territorial integrity.

In the interim, Guterres mentioned that he would concentrate on enhancing the efficiency of a U.N.-brokered agreement that resumed Ukraine’s Black Sea food and fertilizer shipments, continue trying, and restart Russian ammonia exports through Ukraine, and seek to accelerate the exchange of prisoners of war. He remarked, “We will continue trying to be useful, offering dialogue platforms for these aspects to minimize suffering.” Moreover, on Iran, Guterres denounced as “totally inappropriate” a crackdown by officials on protests over the death of a young woman in custody and said, “we are witnessing and strongly denouncing massive human rights violations.”