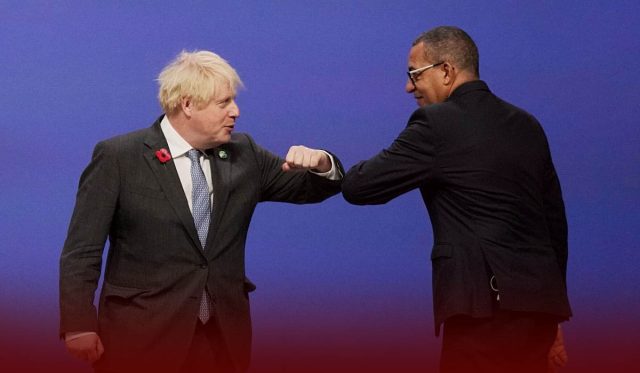 Leaders of the world’s major countries at COP26 turned up the heat and possibility to doomsday rhetoric Monday in an effort to bring new firmness to sputtering global climate dialogues. Boris Johnson, the British Prime Minister, described global warmings as an end-of-the-world device strapped to humanity. Antonio Guterres, the Secretary-General of the United Nations, told his colleagues that we are digging our own graves.

Similarly, Mia Mottley, the Prime Minister of Barbados, spoke for vulnerable island countries, added moral thunder, warned world leaders not to allow the path of selfishness and greed to sow the seeds of common humanity destruction. Narendra Modi, the Indian Prime Minister, said his coal-dependent nation will intend to end adding greenhouse gases to the atmosphere by 2070, twenty years after the U.S. and around a decade later than China.

Modi said the aim of reaching net-zero gas emission by 2070 was one of five significant measures his country planned to start to meet its commitments under the 2015 Paris climate agreement. Furthermore, German Chancellor Angela Merkel and U.S. President Biden avoided mounting rhetoric and dug into policy. Queen Elizabeth II expressed her hope in a recorded message that the climate conference would be one of those rare moments where every country will have the chance to rise more than the politics of the moment. History revealed that when countries come together for a mutual cause, there is always space for hope.

The German Chancellor has called for the pricing of CO2 & a reduction in emissions. At the @UNFCCC summit, #COP26, Angela Merkel said that industrialised countries, in particular, bear a responsibility. pic.twitter.com/TuQDUyFMEB

Countries should Focus on this Decade Net-zero Goals

One of the biggest concerns of the United Nations is that some nations are mainly focusing on vague long-term net-zero gas emissions goals instead of getting decrease this decade that might prevent the rise in temperature that would surpass the 2015 Paris climate goal. Indian prime minister also highlighted shorter-term goals for his country – the world’s third-biggest carbon emitter nation. He also raised the Indian goal for non-fossil energy production, achieving half of its energy needs with renewable means, reducing carbon emissions by one billion tons compared with its previous targets, and cutting the carbon emission intensity of its economy by around forty-five percent – all by 2030.

European officials privately expressed their displeasure at the late target of India, but they denied to comment publicly. Instead, Ursula von der Leyen, the European Commission President, pushed previously announced efforts to make Europe the first net-zero greenhouse gas emissions continent in the long term and decrease emissions by fifty-five percent in this decade. She also pushed other wealthy countries to help poorer countries as more as Europe does and put a price on carbon emissions because nature can’t pay that price anymore.

On the other hand, the President of Bolivia, Luis Arce, said that the speeches from developed nations aimed to portray them as leaders of climate change, but this is contrary to the truth. Arce added that the wealthiest countries need to accept their historical responsibilities for causing the warming issues and not fix it by imposing rules on emerging nations. However, the real solution is an alternative to autonomous consumerism and capitalism.