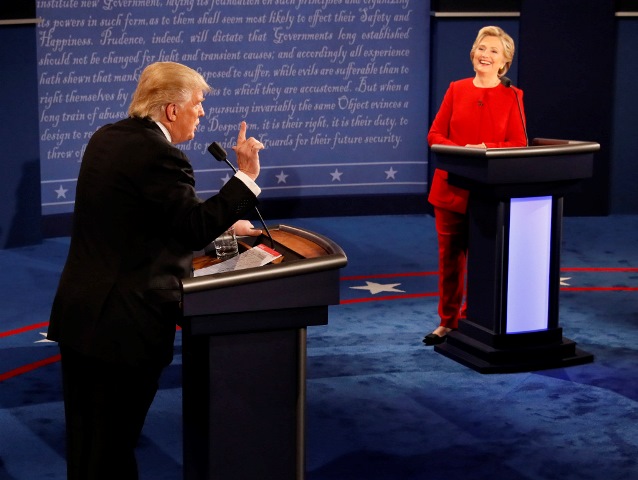 Hillary Clinton and Donald Trump had their first face-off on September 26, 2016 at Hofstra University, Hempstead, New York. Lester Holt was on stage with the participants to moderate the debate. According to many Hillary Won the first and most anticipated debate before the Election Day. There is no hard and fast criterion to asses as who won or lose the debate. However, the post-debate polls show that many voters made their decision in favor of Mrs. Clinton. Nevertheless, the war between people, ideologies, mind-sets, sane and insane concepts and most importantly the winners and losers in not over yet.
Watch First Presidential Debate Between Hillary Clinton and Donald Trump live from Hofstra University, Hempstead.

Around 100 million viewers were expected to have their eyes on the TV screens but the estimates show over 80 million got glued to the television-sets to watch the smack down. CBS, Fox, ABC and NBC attracted a total of 46 million people breaking record with the cable channels being added. Lester Holt did a good job although he was not at his best but carried the debate quite nicely. Fact-checking was also impressive on the part of Holt. NPR and Bloomberg had live fact-checking campaigns during all the rounds of the Presidential battle. The showdown from the very start was getting nastier and nastier. Trump fiercely criticized rather bashed Hillary on Email scandal and mishandling of Benghazi. Hillary responded to the words of the Trump by condemning his behavior with women, his take on immigrants and his Tax returns. As many suggest that Trump lost his cool and was undisciplined and unprepared while the former secretary of state was comparatively measured, prepared and more involved. Here are some of the instances of heated exchanges and obviously the significant excerpts from the debate.