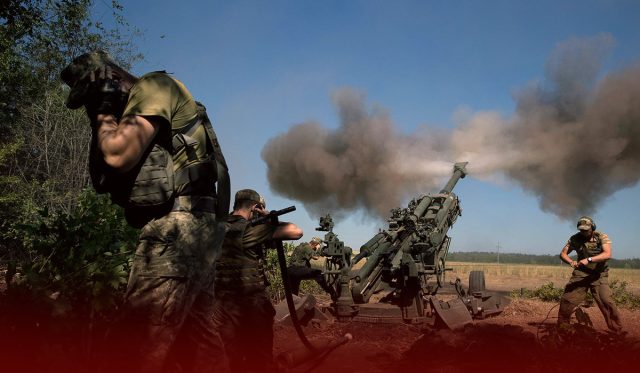 Russian military again started targeting Ukrainian cities with long-range missile strikes, just one day after Russian Foreign Minister Sergey Lavrov warned that Moscow is planning to expand its war in Ukraine beyond the Donbas region. On Thursday, Ukrainian officials said that Russian shelling of several districts of Kharkiv – the second largest city of Ukraine, including a market, killing three people and wounding twenty-three others.

Oleg Synegubov, the regional governor, said that one child was also included in the dead. Furthermore, Mayor Ihor Terekhov stated that the Russian military is harshly targeting Kharkiv and hitting peaceful residential areas to kill civilians. Yesterday, Pavlo Kyrylenko, the regional governor of Donetsk, a news agency, that Russian airstrikes hit and damaged two schools in Ukrainian-held Kostiantynivka and Kramatorsk, while at least one missile hit the Bakhmut city.

The latest missile strikes come just one day after Sergey Lavrov, the Foreign Minister of Russia, told state-run media news agencies that Moscow plans to expand operations amid current weapon deliveries to Ukraine from the U.S. and other Western nations. In addition, Lavrov told state news RIA Novosti and RT TV news agency that the geography has changed. It’s not only Luhansk and Donetsk but also Zaporizhzhia, Kherson, and many other territories.

On Thursday, the defense ministry of the United Kingdom said that the Russian military was continuing small-scale attacks along the front line in the Donbas region – the major focus area of war. The ministry stated that Moscow was possibly closing in on the Vuhlehirska power plant. Additionally, it added that the Russian army is focusing on capturing critical infrastructure sites.

On Wednesday, the United States announced its strategy to send four additional rocket systems and more artillery rounds to help Ukrainian forces. Likewise, Lloyd Austin, the United States Defense Secretary, said that the U.S. provided Ukrainian forces with long-range rocket systems, including HIMARS, and they are using them effectively to hit long targets. On the other hand, Ukrainian troops are trying to hold off Russian advances in the Donbas region.

Chairman of the Joint Chiefs of Staff, General Mark Alexander Milley, expressed that Ukrainians have been using United States-supplied several rocket launchers to hit Russian supply lines and command centers. Moreover, Milley said that the Ukrainians intend to continue the fight. He added that the future of the Ukrainian military would depend on the number of ammunition and the long-range rockets the Ukrainians have.