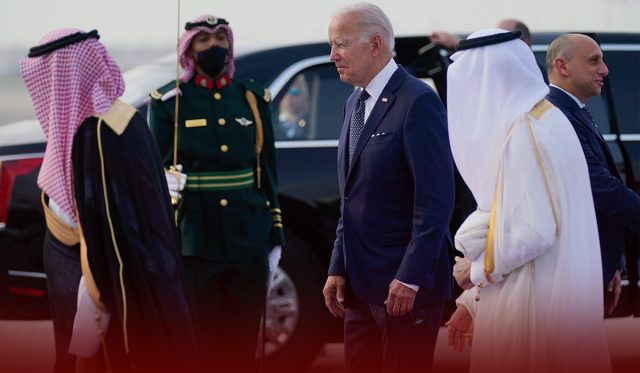 On Saturday, United States President Joe Biden will announce his strategy for the Middle East as he concludes his four-day trip meant to strengthen United States’ positioning and knit the region against Iran. The U.S. president will meet with the leaders of state in Jeddah from six Arab nations, along with Iraq, Egypt, and Jordan, for a regional meeting.

US President Joe Biden arrives in the Arab Gulf to meet officials to define strategies for countering the growing threat of Iran. It will be the last destination of the American President as he closes his four-day trip.#JoeBiden #gulfarabstates #iran #bidentour #bidenisrael pic.twitter.com/qPRycMnjJu

It comes one day after he advocated steps toward stabilizing ties between Saudi Arabia and Israel and pursued restoring cooperation with the crown prince and Saudi king after once vowing to make the kingdom an exile for its human rights abuses. The White House stated that when the U.S. president speaks to the Gulf Cooperation Council (GCC) & its Arab allies, he will offer his most effusive vision for the region and how the United States can cooperate with it.

Biden’s first Middle East tour comes eleven months after the chaotic United States withdrawal from Afghanistan. The president intends to reprioritize the country away from the disastrous wars of the Middle East and current disputes expanding from Libya to Syria. Jake Sullivan, the national security of President Biden, told reporters that it is a strategy fit for 2022 as opposed to the significant land wars of the last twenty years that the United States fought in this region throughout the 2000s.

Prices of energy, which have risen since Russia invaded Ukraine, were expected to be high on the president’s agenda. However, Biden’s advisers expressed skepticism about his ability to deliver a deal that would boost supply immediately. As a result, Biden said late Friday that it likely wouldn’t be seen for at least another two weeks.

In addition to concerns about food security, climate change, and terrorism, Biden was slated to hear concerns about the stability and security of the region. Regarding foreign policy, the nine heads of state of the Mideast don’t agree much. By squeezing Iran over its regional reach and proxy networks, Saudi Arabia and the United Arab Emirates are trying to isolate Iran.

Oman and Qatar, however, have strong diplomatic ties with Iran and have served as mediators in dialogs between the U.S. and Iran. Recent talks between Washington and Tehran officials in Qatar aimed to revitalize the nuclear deal between the two countries. When Saudi Arabia, the UAE, Bahrain, and Egypt cut off ties with Tehran, Iran rushed to Qatar’s aid. In addition, Qatar and Iran share a vast underwater gas field in the Persian Gulf.